The Red Hat Society women’s social club was founded in the US by Exalted Queen Mother, Sue Ellen Cooper. In November 1997, Sue Ellen purchased a red fedora hat from a thrift shop, and gave it along with a copy of The Warning poem to her 55 year old friend as a birthday gift.

April 25th the following year, Sue Ellen and a group of 5 friends got together for an afternoon tea while wearing red hats with purple clothing. This lead to the birth of the “Red Hat Society“, and is why April 25th is celebrated as “Red Hat Society Day“.

In 2000 the custom of ladies under 50 wearing pink hats with lavender clothing, and being “Pink Hatters” was introduced.

By 2004 there were 40,000 chapters worldwide! In 2005 Red Hat ladies were seen on the TV show The Simpsons. In 2011 the first red hat is put on display in the Smithsonian museum of American history. 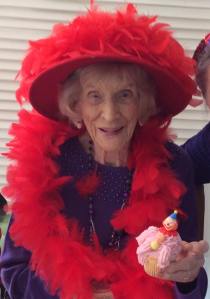 The Supreme Matriarch Florence Slattery of Rose City Red Hatters Warwick Queensland was first to bring the red hat concept of love, laughter and friendship to Australia. It is said she saw Red Hatters while on a trip to the US, and decided to start a chapter here. Florence received her membership certificate on the 25 July 2001, and celebrated her 100th birthday on the 22nd June 2016.  Sadly Florence passed away on the 5th March 2017.

Due to the official RHS day being April 25th (which in Australia is ANZAC day), many Australian Hatters feel it is inappropriate to celebrate Hatting on this day. So many instead choose to celebrate “Aussie Red Hat Day” on July 25th, to both honour the legacy of Florence starting Hatting in Australia as well as celebrating the Red Hat Society itself.

Theme by Anders Noren — Up ↑